Historical romance about one of the Spanish kings named Ramiro, claimed by V. Beltrán to be Ramiro I of Aragón (beltran2018).

Narváez only gives one stanza of text. The remainder of the text given below is from the earliest other known version in cr47, the so-called Cancionero sin año, from the edition made by Vicenç Beltrán (beltran2018). Other later texts expand upon this one.

In the edition made by Durán (Romancero general, No. 1.232, BAE, xvi (1921), p. 214) Durán appends a note to the effect that the particulat king Ramiro of Aragon could not be established: "No sabemos a qué rey Ramiro de Aragón pertenece la época de este romance, el cual parece que es sólo fragmento de alguno que se ha perdido: pero de todos modos, es, acaso, uno de los más célebres y populares y que más han servido para glosas, y para temas de otros muchos que lo han mudado o contrahecho." [We do not know to which King Ramiro the period of this romance, which seems to be only a fragment of some other that has been lost: but in any case, it is one of the most celebrated and polpular and that tas served for many glosses, an for themes of many others which have modelled on it.] The text ot the romance is found in a pliego suelto [broadsheet] titled “Siete romances” (Valencia: [Juan Navarro], 1561), that surviv es in Italy (Infantes 2013. no 28). Beltrán appears to have resolved this as Ramiro I of Aragon )r. 1035-1063) (beltran2018)

The music is set using the I-IV-V progressions of diatonic harmonic tonality. Lafargue has poisted that this might be related to the Conde Claros ground, but it equally possible that there is no real connection. The music has characteristics that make it unusual among the romance repertory. It is built upon a repeated harmonic scheme, and with a rhythmic patterning that, in the majority of the work but not systematically, divides groups of eight semiminims of each pair of bars into groups of 3+3+2. Lafargue points to the similarity of the harmonic scheme to Conde Claros. She claims that “Ya se asienta el rey Ramiro is built on an extended Conde claros pattern: the I-IV-V-I formula is extended to I-IV-V-I-V-I (lafargue1999). Every statement enriches the preceding one with a longer ending. It is the only romance for voice and vihuela that she has found which appears to be a written example of improvised singing on the same bass and the same harmonic scheme as Conde claros. (She spoke about this in a paper she read at the Medieval-Renaissance conference in Spoleto in 2001). While she is not strictly correct, there does seem to be some connection. For an exact fit, it needs to be considered that Conde Claros is defined by a combined melodic-harmonic-rhthmic pattern. The melodic pattern is absent here and so is the rhythmic one: the harmonic patterning is based strongly on the I-IV-V sequence. The structure of this piece could, however, tell us something more about improvisation in romance recitation. After an initial anacrucial bar, the piece is structured regular two-bar units, each one a single harmony. The V-I unit in bold type is a repeated refrain that marks of the end of each larger unit and the end of each poetic verse. It has a standard texture as well: I- | I—IV—V—I // I- V—| I—IV—V—I // I- V—I—VII—| I—IV—V—I // I- V—I—VII—| I—IV—V—I (see analysis section of this entry)

The following diagram shows the chordal structure of the music with a I-IV-V-I progression at the end of each verse of the quatrain. In the diagram, each chord followed by a hyphen is a single bar, each chord followed by a line is a two-bar unit, and each V-I ending of each line is a standard repeated texture as well, effectively a refrain. Text repetition is used to to prolong each successive verse. 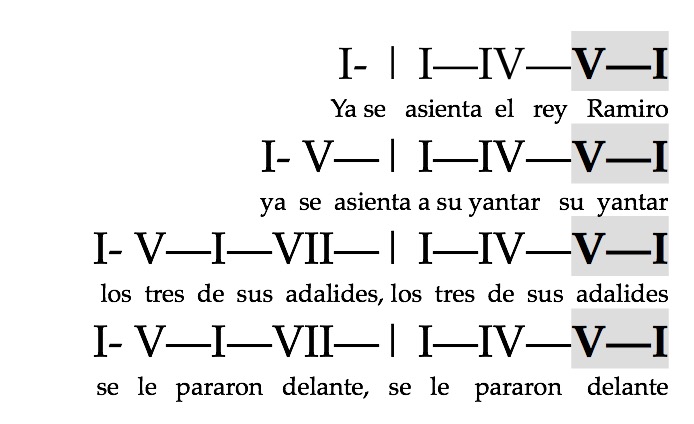 Narváez underlays one strophe of text:

Now King Ramiro sits down
now he sits for his meal:
three of his commanders
stand before him:
one is called Armiño
another Galván.
the other Tello the guiding star
who the commanders bring.