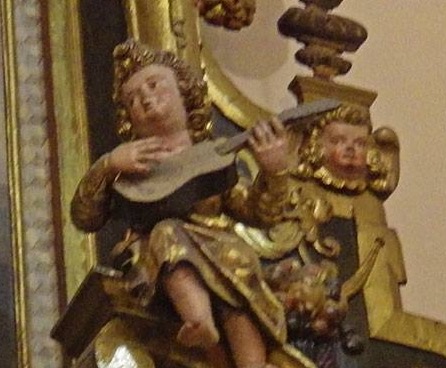 Artwork.
This sculpture and the associated lutenist (19-100b are from the retablo (altarpiece) of the church of Santa Maria la Major, Inca, Mallorca. The date is hard to establish. The present building was begun in 1706 and finished in 1893. Perhaps these cherubs are from the 19th century. Provisionally, I am assigning this instrument to the early nineteenth century until further information is known.

Instrument
The guitar is medium size with a profile of its soundboard that is clearly associable with the sixteenth-century vihuela. The body, however, is of greater depth than found in vihuelas, more like an instrument of the seventeenth century. This instrument was possibly modelled on a much earlier instrument. The style of the pegbox also points to an earlier period. From the low resolution of the image it is difficult to see the number of pegs: it may be a six-course instrument, but at least a five-course one. The bridge has moustaches, and the soundhole is very low on the body. The fingerboard appears to be raised, but this may be the result of the way the guitar was assembled by the sculptor rather an attempt to depict a rasied fingerboard. The cherub playing the instrument has the thumb behind the index finger, in amanner typical of many sixteenth-century players.

Image
This image was given to me, perhaps by Chris Goodwin