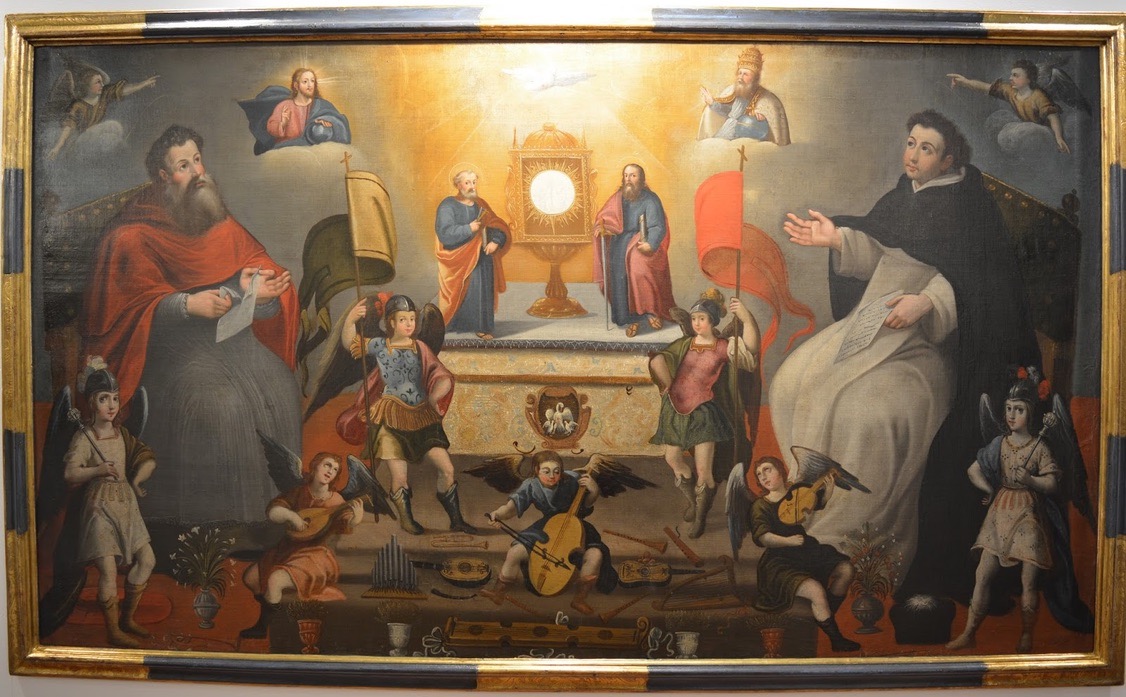 ARTWORK
No details are available concerning the origins of this painting or the artist who may have painted it. It is located in the current modern church of San Ildefonso in Valladolid, presumably having come from the former church that was demolished in 1965. The original church of San Ildefonso was built extramuros in Valladolid in 1575 between the Campo Grande and the Río Pisuerga that remianed the parish church until 1844, when it moved to the church that had formerly belonged to the Convento de Madres Agustinas Recoletas (founded in 1606), located very close to the original parish church. It is not clear whether the painting was originally part of either of these old churches. The style of the artwork recalls the paintings of angels with instruments by Diego Valentín Díaz (see 17-123, 17-124), hence the provisional dating of the painting in the first third of the seventeenth century, also based on the decoration of the vihuela and lute.

INSTRUMENTS
The painting includes numerous instruments in the foreground. The three principal instruments being played by angels are (left-right) a lute [17-136a], a bass viol, and a vihuela de arco or violin. Each of these instruments appears to have four strings. On the ground at the feet of the angels are (l-r) a portative organ (just the keyboard and pipes), a lute or similar instrument with no bridge and strings attached to the end buttom with early 17th-century decorations on the soundboard [17-136b], a small sackbut or slide trumpet, a cornetto, a transverse flute, two shawms, a vihuela or guitar decorated in early 17th-century style [17-136c], a bajón (dulcian) and a harp. In front of the podium rests an imaginary zither type instrument with three connected soundboxes, in some ways reminiscent of a later tromba marina.

IMAGE
Photo taken by Gracia Gil, 2021. Used with her permission