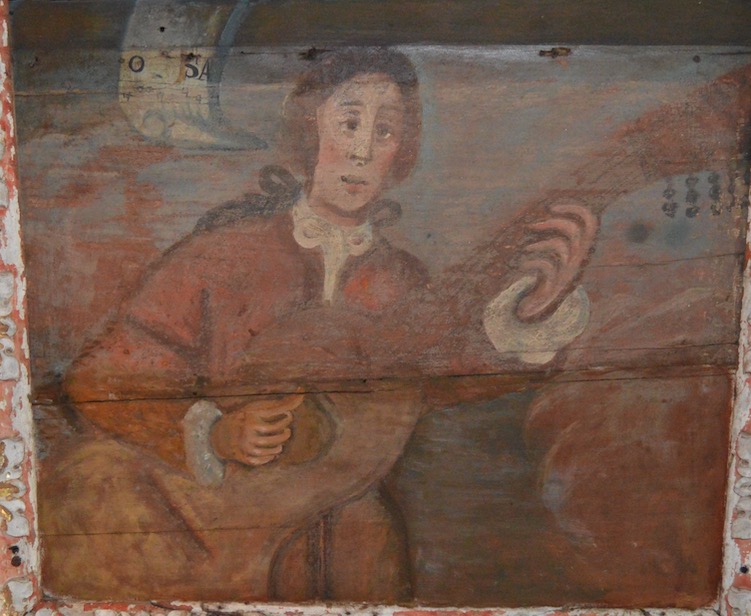 Artwork
This painting, located by Portuguese researcher Sónia da Silva Duarte c.2021, is on the ceiling of a rural church in Baião (Portugal) about 80km inland from Oporto. The patrons of the church were the Marquises of Nisa (connected to King D. João IV) and all paintings have sacred themes (Marian, Christological and hagiographic). She suggests that the painting may have been copied from engraving (as used to be common). This painting of the vihuela player is one of three musical panels. The others depict a chapel master and a choir master. One, dressed in civilian clothes, nobleman, has a music roll in his hand and conducts, raising his arm, the other has a wooden stick or baton in his hand and is dressed in religious garb. The vihuela player is dressed as a nobleman whereas in most Portuguese painting of the time, vihuelas are in the hands of angels in religious works. To the left of the vihuelist at the top of the painting is a page of music with the letters “O SA” and one staff of mensural music on a four-line staff, but not real music. The date is not certain. The painting may date from the time of Joao IV, although details of the player’s hair and clothing suggests that it could be later.

Instrument
A large-bodied vihuela with a flat fixed bridge and round soundhole, perhaps without a rosette. The bridge is placed half way between the lower bout and the soundhole, more than usual for guitars of the period. The image available makes precise description of other details difficult. It appears to have five (single?) strings attached to the bridge, but in other places on the neck, the courses appear to be double. The shape of the rectangular pegbox is more characteristic of later instruments from the later 17th century, although the full pegbox is not visible. Five black pegs are inserte from the rear.
The player’s right hand is shows a technique with the thumb forward of the fingers (figueta castellana) and the left hand is placed on the fingerboard in a way that does not correspond to a real fingering.