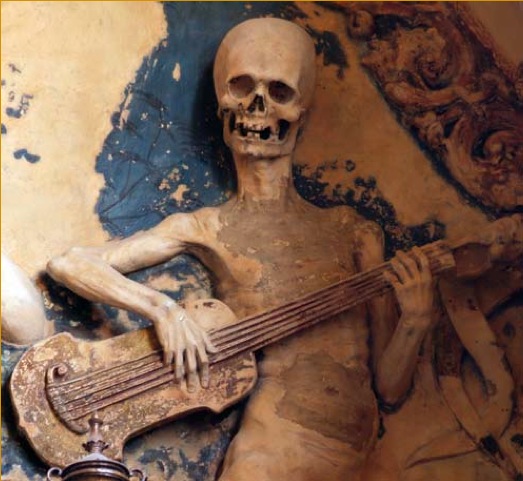 Polychromed plaster sculpture from the Chapel of the Benavente showing the personification of Death playing a five-course vihuela.

This instrument is on the cover of Hispanica Lyra 12 (November 2010), with a high quality photo and commentary by César Rodríguez (rodriguez2010). This Spanish commentary reads as follows in translation”

In 1544, Don Álvaro de Benavente, a wealthy money changer and merchant from Medina de Rioseco in the province of Valladolid, decided to build a chapel in the Church of Santa María in that town, to be used as a burial place for his closest relatives and for himself and his wife. In addition to this funerary function, Don Álvaro decided to dedicate the chapel to the devotion of the Blessed Virgin. He entrusted the direction of the work to the architect Juan del Corral and the execution of the decoration to his brother, Jerónimo del Corral. Construction lasted two years, and all the sculptural work was carried out between 1548 and 1551 approximately, using polychrome plaster. Subsequently, Juan de Juni completed it in 1557 with an extraordinary altarpiece dedicated to the Immaculate Conception.
In order to realise his intentions, Don Álvaro commissioned the iconographic programme from a friend of his, Fray Juan de la Peña. This Dominican friar conceived an ambitious and complex scenario in which, along the walls of the sacred precinct, he traced an eschatological panorama covering the destiny of humanity, from its divine creation to the Last Judgement. On the choir wall we find various scenes taken from Genesis; in one corner, the scene of the Expulsion of Adam and Eve from Paradise attracts our attention, not only because of the beauty and drama of the characters, but also because both are preceded by a sinister musician: a stark figure, in the manner of a decomposing corpse, sardonically signals their way of no return out of the Garden of Eden, leading them with the sounds of a vihuela played with evident glee.
The limitations of the expressive medium, in this case polychrome plaster, which is fragile and difficult to carve, impose severe restrictions when it comes to depicting a musical instrument in detail. The relief lacks detail, leaving us, therefore, with many doubts, not so much with regard to the realism of the instrument, as the whole style is naturalistic and fully Renaissance, but with regard to the precise type of instrument depicted. We have decided to consider the instrument as a vihuela because, although it has schematic and, in some cases, confusing features, both the shape, the size, quite large in relation to the body of the sinister player, as well as the number of courses (five doubles, with the curiosity of having an apparently simple drone) and the fact that it is around this time that Fuenllana began to publish works for vihuela with five courses, justify, in our opinion, this denomination. It is a proportionate instrument, with approximately equivalent lengths for neck and body, and with a sickle-shaped pegbox ending in a monstrous head in which we can see the holes for the pegs. It seems clear that with this finial the carver intended to give the vihuela a terrifying appearance, in keeping with the nature of the player. The ambiguous elements are the absence of the rose, although the right hand could be covering it, the lack of frets, the curved bridge and the absence of nut. We have an example of a carved five-course vihuela, without frets and with a more or less rounded bridge, in a bronze vihuela from the lectern of Juan Nicolás de Vergara in Toledo Cathedral (ca. 1565). The general typology of the vihuela is archaic, with an indented waist; in this sense, it strongly reminds us of the vihuela painted by Pinturicchio in the Allegory of Music in the Borgia apartments in the Vatican, a vihuela which also has a sickle-carved pegbox. This typology is still present in iconography well into the 16th century, as in the study for a King David by Bernardo de Campi (1570) for the dome of San Segismundo in Cremona. It seems that the strange and unlikely position in which the instrument is held is due to the general composition of the scene; the figure is in movement and there is very little space left until the end of the wall, so that the vihuela is displaced backwards until it coincides with the limit of the previous figure.
----------

This artwork is also cited on the website “Veterodoxia” by Pepe Rey https://veterodoxia-peperey.es/2010/11/la-danza-de-la-muerte/3/ (consulted 11/11/2021).
The website reproduces a description of the chapel by V. García Escobar: “La capilla de los Benaventes en la parroquia de Santa María de Medina de Rioseco”. Semanario pintoresco español, 1848, p. 213, translated here into English:
The interior of the chapel is a square of 28 Castilian feet, crowned by an elegant semicircular shell [...] But where the great merit lies is in the detail of the forms, in the ornamental features, in the refinement of the execution covered by the walls of the sanctuary; in its internal faces, of a very rich stucco, a tapestry seems to be stretched over them, admirable for the opulence of its design, the freshness of its proportions and the fantasy of its conception [...]. Certainly, some of these reliefs, through a grotesque formula, contain a profoundly philosophical and very Christian thought. It represents, then, an open picture in the space between the cornice and the curve of one of the arches of the vault, the history of our first fathers, in three groups of great relief. In the one at the back is the Eternal One, taking the woman from the rib of the man; in another, Eve gives the fatal apple to the weak Adam, and he likes the fruit of the curse. And finally [...] the sinful husband and wife flee from the heavenly minister, who casts them out of Paradise. Up to this point everything is severe, pathetic and grand. But at the edge of the painting a strange, insolent, ridiculous object stands out, death: but death dancing and playing a guitar, which precedes Eve and Adam in their departure from the holy garden with cruel mockery. And this figure, which at first glance makes one laugh, immediately reveals to the thinking spirit a terrible idea beneath that shocking emblem. The degeneration of mankind, the misery and sorrows of mankind, the history of the world... everything, everything finds its meaning behind that hieroglyphic of comic and vulgar meaning!

Further information on the chapel is available on the internet at http://domuspucelae.blogspot.com/2018/06/excellentiam-la-capilla-de-los.html