Angel playing vihuela de mano. Tempera on wood. Church of St Peter and St Paul, Gonesse (Val d’Oise) about 15km north of Paris. Painted on wood panels that decorate a curved area below the organ case dating c.1508. Twelve angel musicians are depicted on 4 panels. It has been suggested on the basis of the nature of the depicted instruments that the painting may be of an earlier date, in the second half of the fifteenth century. 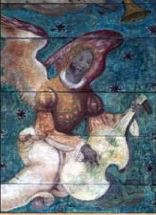 ARTWORK
Angel playing vihuela de mano. Church of St Peter and St Paul, Gonesse (Val d’Oise), approx. 15km north of Paris. Tempera on wood, painted on panels that decorate a curved area below the organ case, dating c.1508. Twelve angel musicians are depicted on 4 panels. It has been suggested on the basis of the nature of the depicted instruments that the painting may be of an earlier date, in the second half of the fifteenth century.

INSTRUMENT
A wide-bodied vihuela with cornered waists similar to instruments from the late 15th century such as the lost Játiva vihuela. (15-334). It has a round central sound hole and decorations on the four corners of the body, of the same type as found on many Spanish instruments. Its most unusual feature is the curved bridge near the join of the body and neck, obviously erroneously placed.

This instrument was brought to public attention by Carlos González. The following is an English translation from the commentary in the article he wrote for Hispanica Lyra (gonzalez2007):

The church of Saint-Paul and Saint-Pierre de Gonesse in the French region of Val d' Oise, north of Paris, was built mainly during the thirteenth century. The paintings that decorate the organ of this church, built around 1508 as recorded on the date painted on it, have four concave panels with polychrome wooden painted in tempera.
In each panel three angel musicians are depicted on a background of the starry sky. The organ was probably originally in a side gallery of the church, but by 1670 was in its current location, at the bottom of it. To complete the area was added in the late seventeenth century, two oil-painted angels with four more musicians, of which we are not concerned here panels. Each panel consists of 16 transverse plates, some of which do not coincide with each other due to shrinkage of wood and the proper motion of the structure that makes up the whole.
The instruments represented in the four central panels in the hands of winged angels that appear to float, are, from left to right and top to bottom : trumpet, triangle, crumhorn, bombard, vihuela de mano, transverse flute or ajabeba, vihuela de arco, lute, sackbut, portative organ, bombard and harp.
Usually considered contemporary with the organ, the morphology of both the vihuela and lute suggest an earlier date, perhaps the last quarter of the fifteenth century.
The subject of angels musicians is well known and well documented in frames and paintings from the thirteenth century, their number seems to relate these paintings to the iconography of the 24 elders of the Apocalypse, in which we always found associated with the number 24 numbers : 6, 12 , 24, 36 , etc .
However, what is really extraordinary about the paintings of Gonesse is the presence of the two vihuelas and in particular, a vihuela de mano, the only one I know in French iconography. It is surprising to find vihuelas in a geographical area so far from the Mediterranean and this may point to a Hispanic or Italian influence on the painter. It is worth asking if a painter who does not seem very well versed in musical instruments, worked from a sketch of a vihuela and simply repeats in both configurations, as he does with the bombards. On the subject of two such similar instruments played differently, several authors have developed the idea of ​​a dialectic between plucked and bowed vihuelas in the late fifteenth and early sixteenth century, given the relative frequency of similar instruments we found with relative frequency similar instruments, one plucked and the other bowed, but we rarely find, as here, the same instrument played both ways.
We will detail the features (some unusual) of these vihuelas.

Vihuela de mano or peñola
Very similar in shape and proportions of the vihuela de arc. Five visible strings though the bridge / comb seems to have six teeth. No visible frets, but a few lines at the join of neck and soundboard.
Clearly, a movable bridge and with a height that does not make plucking with the fingers easy, in fact the vast majority of instruments of this type have a tailpiece bridge glued to the soundboard. There are doubts whether the angel is playing harp with fingers or a quill, and if we look in detail at the right hand, there seems to be the end of a long curved plectrum, which equally could be a drawing of the sleeve.
The four decorative elements that appear on the soundboards of both vihuelas may be inlaid, painted or simply holes, since the three techniques are plausible, but not distinguished in the image. However, they recall the Mudejar decorations that appear in numerous Spanish string instruments of the fifteenth and sixteenth centuries.