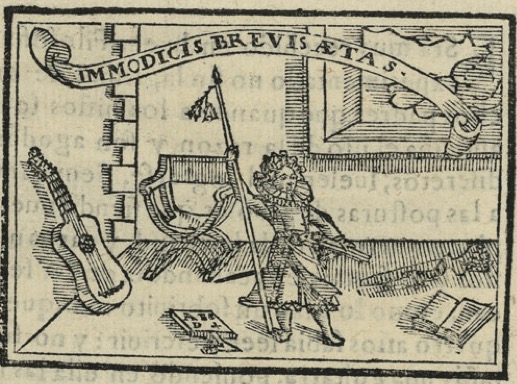 INSTRUMENT
THE GUITAR IS CHAR
This instrument is characteristic of guitars and vihuelas of the 16th century. It is more accurately depicted that the vihuela in 17-116 from the same source. The shape and proportions appear accurate, as do the details of bridge, rosette, frets and pegbox, despite the small size of the woodcut.

The accompanying commentary is based around the bad luck that can come to prodigious children whose talents are not recognised by their elders.It describes a nephew of the writer who “at four years knew how to read and write: and not only did he play a guitar, setting on it the sonadas which were given to him, but also lowered and raised it a tone or a semitone, tuning it with such perfection that he was admired by the musicians and masters of the chapel.” [original text in “Documents”

Corona-Alcalde, Antonio. “The Players and Performance Practice of the Vihuela and its related Instruments, the Lute and the Guitar, from c. 1450 to c.1650. as revealed by a Study of Literary, Musical, Theoretical, and Archival Sources”. Diss. King's College, University of London, 1999.