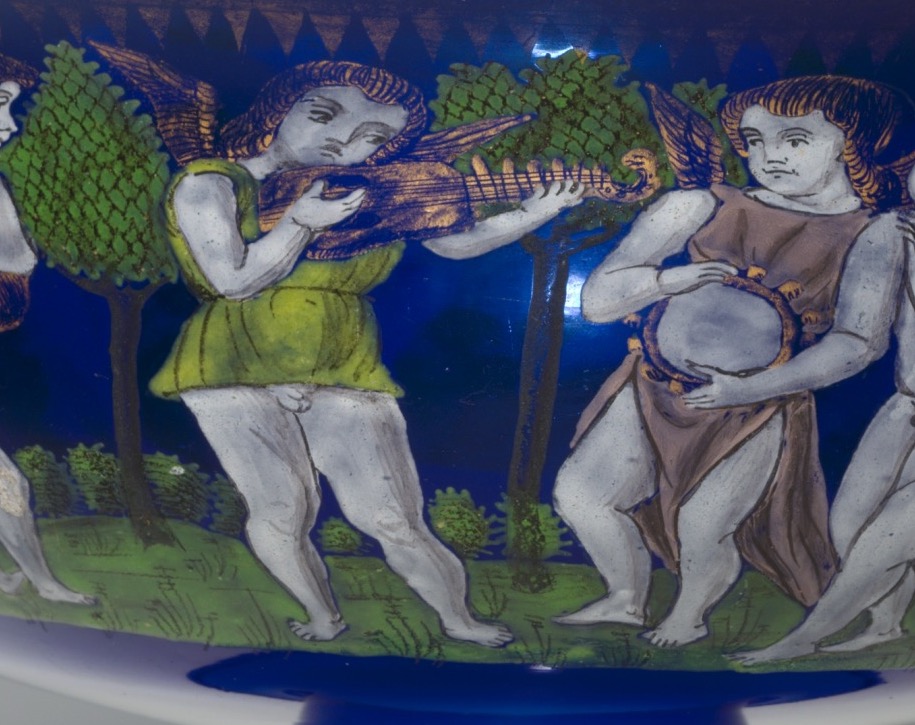 ARTWORK
Enameled glass bowl. Formerly considered to be of late 15th-century Venetian origin, but now considered to be from Murano and made in the 19th century. It is held by the Cleveland Museum of Art where it is catalogued as a “Tazza with a Frieze of Putti” with accession number 60.38, It measures 18.3 x 22.9 cm. As late as 1978, the Museum Handbook catalogued it as dating from c. 1490. This date is repeated by Bellow (plate xxxi). The current museum page now cites its manafacture as in the 19th century (https://www.clevelandart.org/art/1960.38#, accessed 14/07/2022). The provenance of this artefact is the collection of Baron Maurice von Rothschild. The bowl is adorned with a circle of putti dancing to the accompaniment of what appear to be a viola da mano, tambourine, rebec and lute.

INSTRUMENT
This viola da mano is plucked by a cherub figure using his with the fingers, but held high on his chest just below his chin. It appears to have seven strings depicted with four pegs or pegholes depicted on the visible side of the pegbox. A bowed rebec (looks more like a gittern /guitarra) and a lute are also depicted. If this artefact were in fact an accurate copy of a late 15th-century original, it places these instruments as contemporary with the Italian instruments of Isabella d’Este made in Venice by Lorenzo de Pavia. Similar footed bowls of this kind, made of blue cobalt glass, are dated from the 1490s. It has been suggested that the instrument may be a cetra instead of a viola da mano.