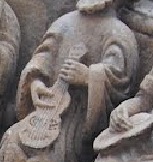 ARTWORK
In this portico of the church of San Martin (Noia, La Coruña), completed in 1434, 9 of the 13 elders have musical instruments. They are all stringed instruments: 4 vihuelas, 2 psalteries, 2 harps and a rabel. Of the four vihuelas, three are held downwards between their players’ knees and appear to be bowed instruments even though there are no bows depicted. The photo at http://www.panoramio.com/photo/69356108 is free to use under Creative Commons. It was taken by “asanloj”

INSTRUMENT
The vihuela depicted here is included in the inventiory because it is well conserved and shows considerable detail (15-201a). The fourth vihuela is clearly shown held in a different position, perhaps to be played as a plucked instrument (15-201b). A clear photograph of the entire portico with all of the instruments is available at http://www.panoramio.com/photo/69356108 (photographed in 2012, accessed 25/04/2014). The photograph printed in paniagua1990 is inverted, flipped l-r, hence the instruments are reversed.

This vihuela is presumably meant to be bowed. This is suggested by the right hand position, as well as the way the instrument is held. It seems to have 5 strings and is depicted to show the strings fixed to the bottom of the instrument.