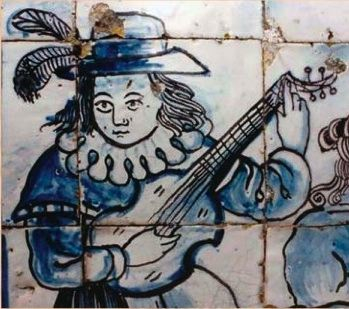 ARTWORK
The Palace of the Marqueses de Fronteira was built in Lisbon in 1671-1672. The dining room was decorated with Dutch ceramic tiles and portraits of Portuguese nobility. See: http://pt.wikipedia.org/wiki/Palácio_dos_Marqueses_de_Fronteira

INSTRUMENT
This is a long-necked vihuela with cornered waists in the style of early 16th-century Italianate instruments. The bridge is not visible, and there is no soundhole, but the suggestion of inlays on the upper and lower shoulders. The neck probably joins at the fourteenth fret adn ten frets are visible on the neck which terminates in a sickle pegbox with five lateral pegs, and an animal head at the extremity.

The illustration used here was in the program of the 2008 Utrecht early music festival.