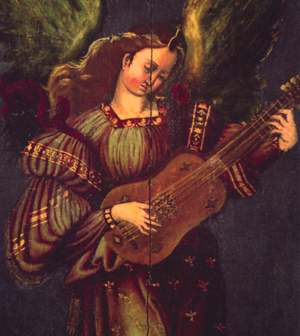 INSTRUMENT
Angel musician plays a vihuela that is consistent with many other Spanish vihuela illustrations in its shape, size, and many of it features. Its main difference is the sickle shaped pegbox that is more common in Italian instruments. The other characteristic that is less typical is that it is has only five-courses of strings (4 double, 1 single), although Fuenllana composed music for a vihuela of this configuration. Among the more typical features are the single rosette in the centre of the soundboard, the placement of the bridge close to bottom, 5 inlaid taraceas in the soundboard. The player’s right hand is placed in a way that suggests figueta española technique with the thumb outside the index finger although, the fingers are directly in line with one another. It has been suggested by Corona-Alcalde (corona2004-1, p. 22) that the frets on this instrument are placed in meantone temperament, but it is unusual for painters to be aware of such detail.