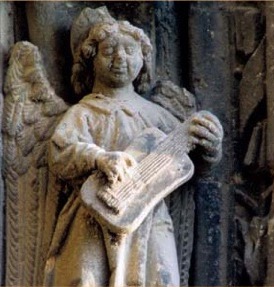 INSTRUMENT
This vihuela from the portal of the Church of Santa María, Requena, is played by an angel, plucking with the fingers. The body of the instrument is considerably more oblong in its profile with gently incurved waists, but quite sharp bouts. The soundbox is hallow and flat. the neck is short and there is no pegbox visible in the photograph. It is difficult to work out the number of courses that the instrument might have. It seems to have seven or eight strings, and could be an attempt to depict a four-course instrument with double courses.

The photograph was used at the 2008 Utrecht vihuela expo, and was probably taken by Carlos González.