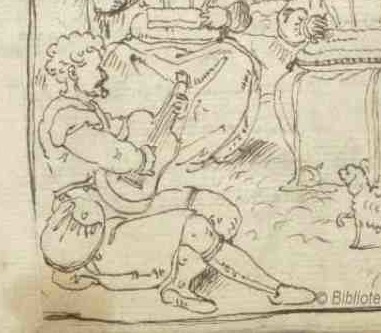 SOURCE
Don Antonio de los Caramancheles, La pastora de Mançanares y desdichas de Pánfilo. is a long poem of some 7000 or more verses written sometime in that years 1630-1660, kept in the Biblioteca Nacional in Madrid (E-Mn, MSS 189) and published for the first time in 2005. It includes the drawing shown here on fol. 51 of the protagonist Pánfilo playing the vihuela to a group of women working at their embroidery. See the entry for this work in the Documents section for the texts that relate to the vihuela. The source was first drawn to my attention by from Pepe Rey (18 Feb 2010). He commented: “Pánfilo, un pastor literario desdichado en amores. La ventaja en este caso respecto a otros vihuelistas más 'reales' es que tenemos una foto suya tañendo su vihuela, caso único, me parece.” [Panfilo, a literary shepherd unhappy in love. The advantage in this case over other more 'real' vihuelists is that we have a “photo” of him playing his vihuela, a unique case, it seems to me]. More extensive information was published by Pepe Rey on his website: http://www.veterodoxia.es/2011/02/panfilo-pastor-vihuelista/

INSTRUMENT
The Illustration on fol. 51r depicts Pánfilo sitting at the feet of some women embroiderers. This is one of seven illustrations drawn in the manuscriptThe vihuela depicted still has the appearance of a sixteenth-century vihuela, quite large, with a deep body and what seems to be a flat back. The size of the upper bout distinguishes it from the 5-course guitars that were becoming the fashion in the first half of the seventeenth century.