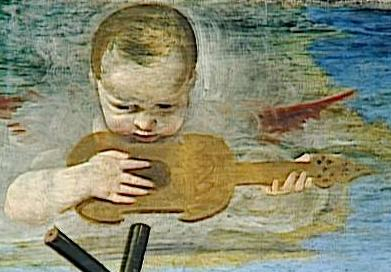 ARTWORK
Madonna and Child surrounded by St John the Baptist and St Sebastian and two patrons. Painted by Antonio Giovanni Boltraffio (1466-1516), a student of Leonardo. It was painted in 1500 for the Casio chapel of Santa Maria della Misericordia, near Bologna. The two patrons are, on the left, Giacomo Marchione by Pandolfi da Casio and, on the right, represented in profile and laureate, his son Girolamo Casio (1464 - 1533), a Bolognese gem merchant and poet, who at the time housed the painter and of whom Boltraffio made several other independent portraits. The detail of the musical angel overhanging the composition, which the sixteenth-century Bolognese tradition attributed to Leonardo da Vinci, seems to have been left unfinished by the painter. Entered the Louvre in 1812 by exchange with the Pinacoteca di Brera in Milan.

INSTRUMENT
An angel plays a small vihuela looking down over the Madonna and child. Its leaf-shaped pegbox suggests that it may have been based on a lira da braccio. It appears to be all made from one piece as was still common c.1500. The small instrument plucked with the ingers has large cornered waists, a central sound hole, no visible strings with a short fingerboard finishing in a leaf-shaped pegpox with seven pegs possiby inserted from below if not from on top.