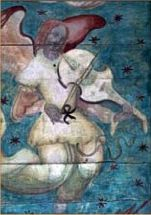 ARTWORK
Angel playing vihuela de arco. Tempera on wood. Church of St Peter and St Paul, Gonesse (Val d’Oise) about 15km north of Paris. Painted on wood panels that decorate a curved area below the organ case dating c.1508. Twelve angel musicians are depicted on 4 panels. It has been suggested on the basis of the nature of the depicted instruments that the painting may be of an earlier date, in the second half of the fifteenth century.

INSTRUMENT
This vihuela de arco is described in detail by Carlos Gonzalez (gonzalez2007). It has a wide waisted body, a neck that continues the curve of the body, without shoulders. The pegbox at right angles or slightly inclined. No visible pegs but looks like it has six strings. It is surprising that the bridge is not in the normal place, and the presence of one in the shape of a comb with six teeth (one per string) near the join of the neck and soundboard, where obviously it cannot do its job: an artist’s error. The instrument is similar to numerous of the Valencian examples. Decorations on the four corners of the body. Another interesting element is the presence in both instruments of a rose, carved on the soundboard or glued to it, and the lack of other holes in big enough to insert a sound post.