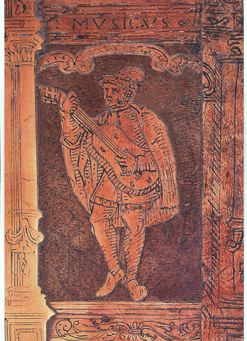 ARTWORK
The choir stalls in Burgos Cathedral were built between 1505 and 1512 by the Burgundian sculptor Felipe Vigarny, probably in association with the expert wood craftsman Andrés de Nájera. The work was oresumably finished by 1512 as the old choir stalls were donated to the monastery of San Agustín in November of that year. The stalls were moved several times but have been in their current location since 1551. Recent scholars have suggested that the young Diego de Siloé may have made some of the carvings, but many of the decorations suggest the participation of Andrés de Nájera.

INSTRUMENT
The vihuelist is labelled “Musicus” at the top of the seat, a sign of the esteem of the vihuela. He is one of a group depicting characters from the liberal arts “Architetus”, “Zaoriz” and “Astrologus”. He is depicted playing while standing and as if a left-handed player. The player is dressed as a gentleman in the clothing of someone from one of the higher social strata. The instrument is not unlike other instruments of the period, such as those depicted in Milán’s El Maestro. The instrument is quite large, like a modern guitar, with inlaid taraces on the soundboard, a central soundhole hidden beneath his plucking hand and a fixed bridge. Foiur strings are depicted in the woodcut but there are six pegs in the pegbox. The instrument is being plucked with the thumb and index finger directly above one another, neither thumb-in nor thumb-out.

The photograph, from Hispanica Lyra 3 (2006) is by Javier Martínez.