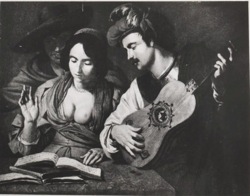 ARTWORK
“Joyeux duo” is a painting attributed to Caravaggio. The painting was sold in Amsterdam 1952-03-18 and its present whereabouts are unknown. This photograph of the painting is held by the Bibliothèque nationale de France, département Musique, VM PHOT MIRI-11 (591).

INSTRUMENT
The woman in the picture appears to be looking on as the young man plays on a 4-course guitar. From the photograph it is difficult to ascertain the nature of the notation. The woman’s raised hand could be an indication that she is singing. The guitar has characteristics that would suggest a date around c.1600, especially judging by the decoration around the sound hole, and the rosette. The back is presumed flat, although it could prove to be vaulted. The size of the instrument is very similar to early 17th-century 5-course guitars, although in this case the four double courses are clearly depicted.