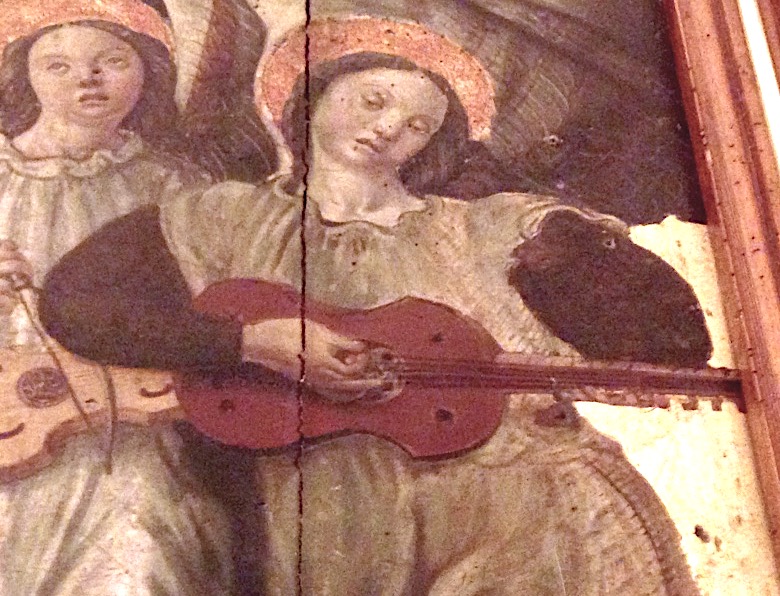 ARTWORK
Painting of Nuestra Señora de la Santa Esperanza, attributed to the Maestro de Alforja, identified by some scholars as Francesc Ribes. 214 x 104cm. Possibly dates from the 1520s or 1530s. The only known date concerning the activity of Francesc Ribes is 1537. The painting was formerly in the Tarragona Cathedral itself before being moved to the musuem (inventory no 3301). The museum dates the painting only as 16th century. (See; http://museu.diocesa.arquebisbattarragona.cat/c_mdespe.htm - consulted 31-1-2016). The painting includes a depiction of bowed and plucked vihuelas side by side at the top right hand side of the painting. The illustrations are testimony to the diverging design and decorative features of the two species of vihuela in the early sixteenth century.

INSTRUMENT
The body shape is unusual: corners on the upper bout and waisted lower bout. It is like an inversion of the small number of bell-shaped vihuelas that are found among the iconography. The soundboard has taraceas on each of the bouts, and the light rosette could indicate that it is made from parchment and inset into the sound hole. The bridge is narrow and flat. The artist has depicted what appear to be five strings, painted as single lines without any attempt to show double courses although the seven visible pegs of the partly obscured pegbox suggests that these are double courses. The peg box itself appears to be channelled with lateral pegs, somewhat similar to the structure of a sickle-shaped peg box, but without any curvature. There are six or seven frets tied around the neck. The plucking technique shows a hand position in which the thumb and index finger are in line, not obviously thumb under or thumb in front of the index finger.